The Red Dragon and The White Dragon 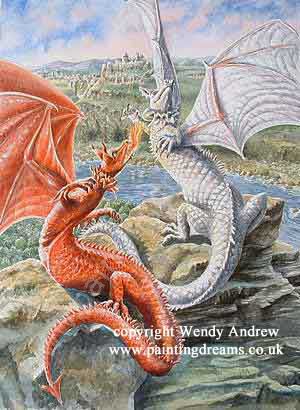 In this myth the castle of Vortigen kept falling down. Merlin explained that it was because there were two dragons under the foundations, one red and one white. ( In the picture the two caves beneath the castle where the dragons lived can be seen.)

The implication of this myth is that the strength of the land, (dragon-energy), could only be harnessed by a true ruler and Vortigen was not such a man. The red dragon has also been seen as symbolic of the people of Britain driven out by the white dragon representing the Saxons, who Vortigen had allowed into the country.