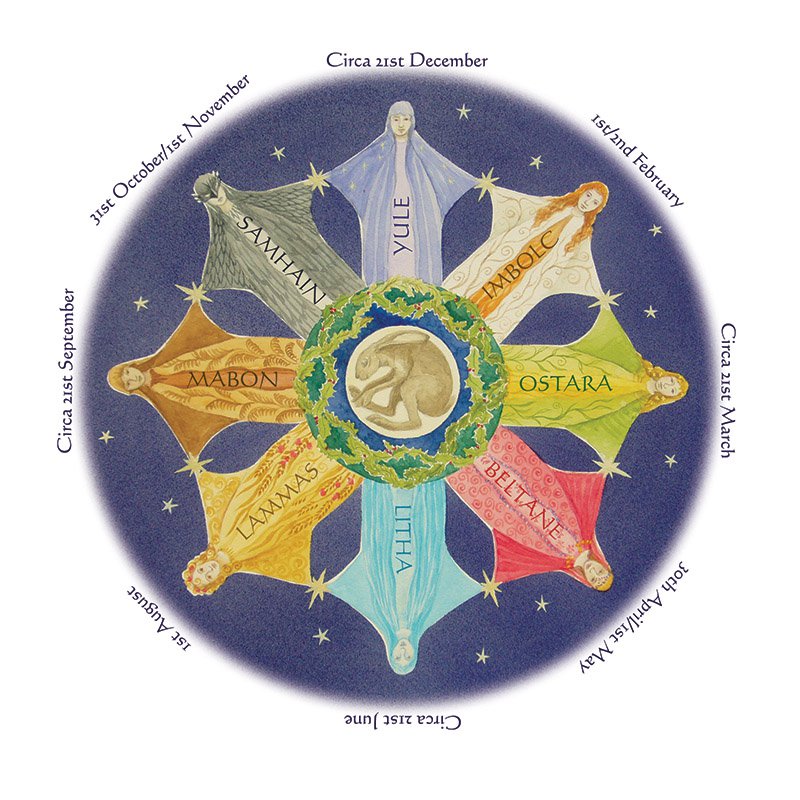 South on the wheel of the year using the Goddess wheel created in Avalon, is the element of Water.

Feel Me now as Mother of Water

I reflect the rays of the sun at its height.

I am the sparkle in the life-bringing rain.

Drink from my springs, be refreshed and healed.

I am Queen of the deep oceans.

Dive into the emotional depths of your being and I will be there reflecting you...

I hold the chalice of emotional wisdom 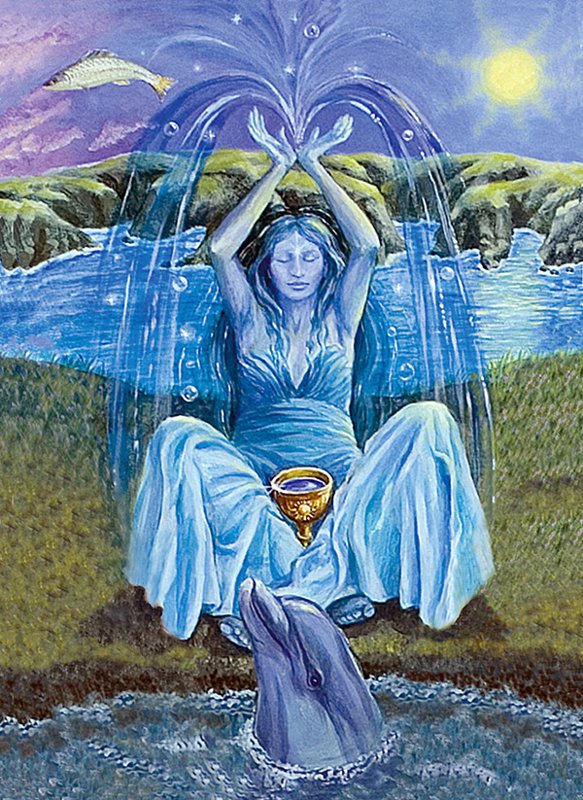 At summer solstice the sun reaches its zenith in the sky. The powerful growth surge of spring is peaking…all is lush and rich in the natural world. It is the longest day and shortest night. It is a night of power and magic!

This is a time to celebrate all that you have achieved and rejoice in the wholeness of our being. It is a powerful time of solar energy. A fiery time of Agni energy. However, this festival has two sides...on the one hand we rejoice in the hot, expansive, light and on the other we acknowledge that we are now moving to the cold, introverted, dark side of the year. The presence of Goddess as Mother of Water helps with the flow into the more receptive cycle. She holds Jala energy...connecting, protecting and nourishing.

On the night of midsummer’s eve it was tradition to process with candles or torches in a circular route, symbolizing the turning of the wheel of the year. (Interestingly this was the origin of the carnival procession). Great bonfires are part of the Midsummer celebrations, fire offering the principal of transformation. Dance, sing and make merry!

On a piece of paper make a list of all the things that you have manifest in your life, that you are grateful for...(these do not have to be tangible things, they can be behavioral achievements like keeping a regular meditation practice, or being careful to be less wasteful or managing not to be impatient etc!)... this is lovely done in coloured pencils, paints or pens and decorated with flowers, birds, butterflies, bees etc. You can hang this up somewhere you will see it for several days leading up to Midsummer. On Midsummer's eve if you have a bonfire then cast it into the flames or if not then place it in a fireproof dish and burn it...letting your prayers fill the night and allowing your gratitude to create a nest in your heart for the ongoing nurturing of these achievements and your inner spiritual growth.

At Summer Solstice the Oak King, who has ruled in glorious abundance since Winter Solstice, surrenders his reign to the Holly King. The following is the Summer Solstice chapter from my book 'Luna Moon Hare' 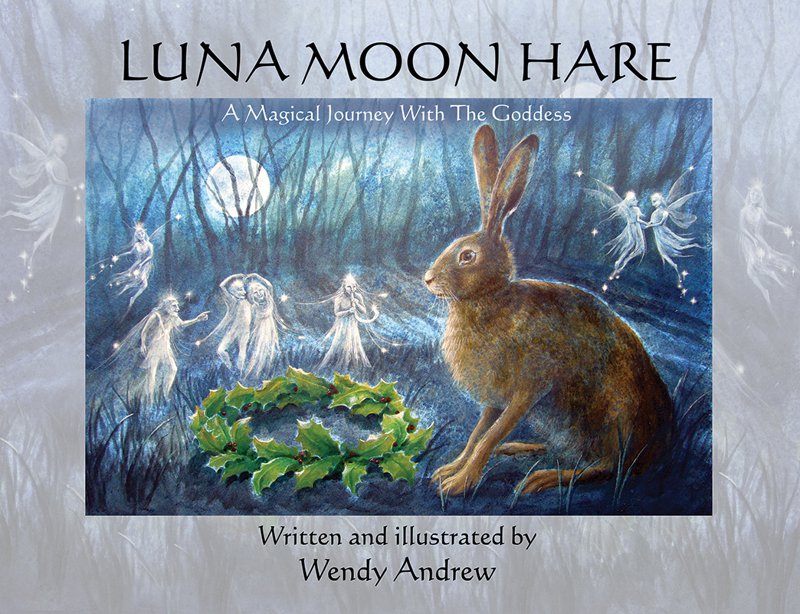 Once upon a mid summer’s eve the setting sun is shining in a bright hare’s eye. The trees are all full and lush with leaves. The grass feels soft and comfortable. The days are long and lazy. In the clear gentle nights Luna has followed the Sap Moon as she has waxed and waned. She has danced with the stars above, below and beyond and the sweet Honey Moon has filled to full. 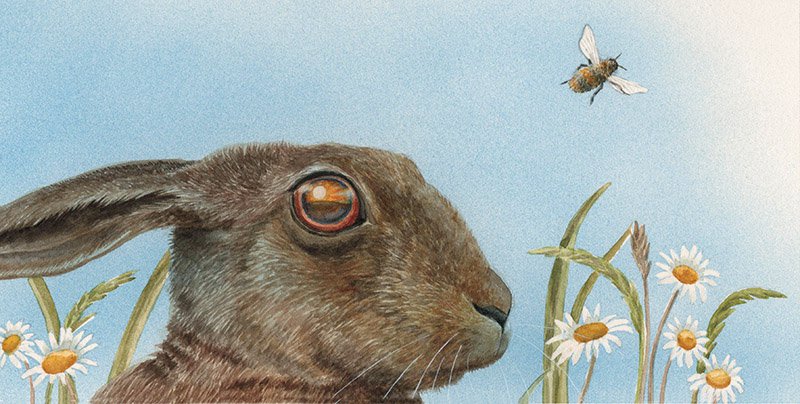 Luna hops lethargically across the field to rest in the long shadow of a tree and tries to sleep. But the Holly crown that she has worn around her middle for all these months, now bothers her. She wriggles and stretches but she cannot get comfortable. In the bee-droning late heat of the day she stretches and bubbles of memories burst in her mind. The battle in the winter night so long ago and Arianhrod pulling back her veil to reveal that magical dawn. Inspirational Brigid and her magical fire. Springing Eostre and her magical dance. Beautiful Rhiannon and her magical orb. This is truly a magical journey!

Now it is getting dark. The crows circle above the tree tops calling, “Go well Luna.” She sets off in search of a drink. She runs round the edges of crop filled fields, through a copse of the trees where an owl hoots to welcome the night and down to the stream. The water level is low but still there was plenty enough to quench Luna’s thirst. As she drinks she sees a salmon gliding through the water. It swims to where the moon is reflected in the mirror-like surface. This is the Honey Moon! The Holly King had said to her, all those journeying dreams ago, “By the Honey Moon I'll return.” She must not be late! She must find the Holly King and return his crown!

She hops about hoping to find a clue as to where she should go. But, oh dear! This is not a night for sensible searching. This is Midsummer’s eve, a night of enchantments! On this night trixie pixies and teasing sprites come out to frolic and play. Poor Luna! They trick her and tease her until she doesn’t know which is up and which is down! They take the path that she is hopping along and wrap it round and round and she gets so confused and completely lost! They pull her fur and trip her up. They pixify a lake to look like grass and she hops straight into it! Splosh!

She sinks into the black waters ... there is silence ...

Then she hears a rhythmic beating ...

And a muffled voice speaking through the water. "Greetings Luna, I am Nimue, lady of the lake. You have journeyed well and have arrived at the dawn of the longest day ... Today you will return the crown to the Holly King ... go well ..."

Luna hears the rhythmic beating now getting louder, faster more urgent. Ber-dum, ber-dum, ber-dum. It is her heartbeat. She needs to breathe. She kicks in panic and bursts to the surface of the pool.

Gasping for breath she pulls herself onto the soft ground at the water’s edge. She looks around. The faery-filled night is over ... A spell of stillness wraps around the earth. Then, slowly, on its day of greatest power, the sun begins to rise. It casts long dark shadows across the ground, reaching out to the west. It pulls up the energy of the land as it rises, shimmering through standing stones and crystals, up through plants and trees. Earth and sun merge at the dawn of the longest day.

As the warmth of the sun embraces the earth, and dries her fur, Luna’s heart begins to race and her whiskers begin to twitch, she MUST find the King! Blinded by the bright sun light and in her hurry she runs straight into the long flowing skirts of a woman! But this is no ordinary woman! Luna looks up to see the warmest most radiant face smiling down at her. Luna realises that this woman is clothed in flowing gowns made completely of flowers and foliage. She is emerging from the ground!

“Hello Luna, welcome to Litha. This is the Summer Solstice. At this time of year there is an abundance of lush growth, the crops are ripening in the fields. Young birds and animals that were born in the spring are growing strong and independent.”

Luna is trying to listen but is distracted by her intent to find the king. As though the flower lady can read her thoughts she gently picks Luna up and cradling her like a baby she softly sings;

"The time will come, do not fear

You will know when he is here.

For now just sleep, my little one

In the warmth of the summer sun.”

Luna’s eyes grow heavy and she drifts into slumber.

Luna wakes with a start! Her senses are on full alert. Surely she had not missed the king! "You will know when he is here." The words of the songs are dancing through her head. Suddenly without any warning her legs spring her high into the air! She is off, running like the wind. It is as though someone else is in control of her body! She runs through fields and woods, by streams and hedgerows and finally through a gap in a hedge and there are the two kings! She has made it!

The two men are fighting with all their might. This time they do not have staves. They are wrestling, clutching one another and trying to throw each other to the ground. Luna wriggles out of the Holly crown that she had carried for so long. As the two men fight the Oak King cries out. He is losing the battle. With one last heave the Holly King throws his opponent down. The Oak King’s crown rolls from his head. Luna cannot control her tears. She hops close to the dying king. He reaches out and pushed his crown towards her and using his last ounce of energy he whispers:

Through the summer’s Hay Moon night.

Fly with my crown, magical hare

Caressed by the Mother Moon light.

Run from the Harvest Moon blades.

Leap with my crown magical hare

Through the golden Mist Moon glades.

Speed with my crown, magical hare

Return with my crown, magical hare

He closes his eyes and dies. Tears stream down Luna’s cheeks but she knows what she must do. She pushes her head and front legs through the crown and with the Oak crown round her middle she hops over to where the Holly crown is laying.

The Holly king had been watching Luna and he walks over to her and bends down. “Thank you my Lady Hare”, he says. “For you have carried my crown through the turning wheel of time. Now I shall reign as the days get shorter and the nights grow longer. I am the King of dark and rest. Weep not for the Oak King, my Lady Hare, for he will return. We each have our time. Without dark there can be no light. Without winter there can be no summer. We are two halves of one whole.”

He picks up his crown and proudly places it on his head. How magnificent he looks! As Luna gazes at him, overwhelmed with emotions, a calm stillness comes over her and in that silence she has a strange feeling that she has been here before ...

From all around comes the song of birds. The air fills with their chorus, the Oak King is dead, the Holly King reigns once more! 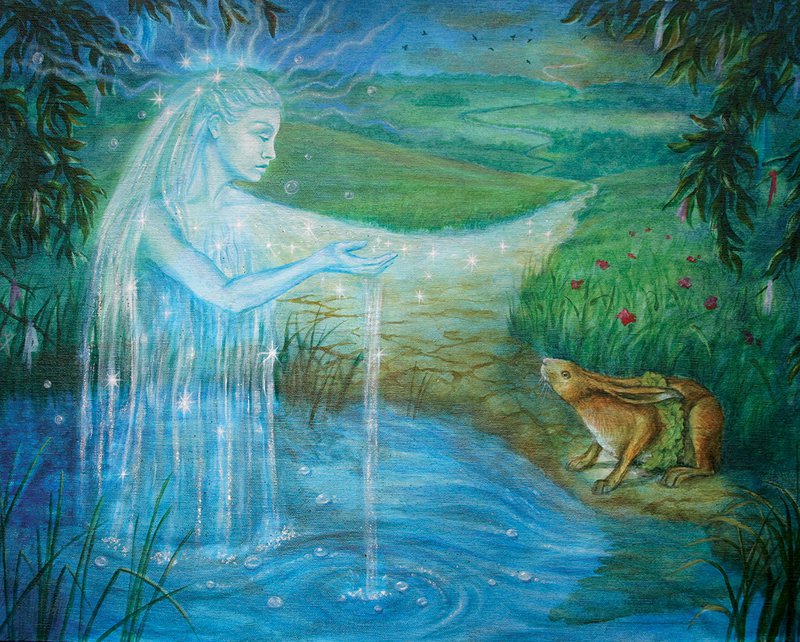 Luna is hot and thirsty and hops away wearing the Oak crown to find water. The sun begins to set and she comes to a spring of fresh clear water and stretches down to quench her thirst. As she drinks the sun glistens on the water, her ears fill with a babbling rushing sound and she hears a voice ... “Drink of me Luna and be refreshed, I am Mother of Water. You have done well. The longest day is done and the wheel turns ...”

Luna lifts her head and a beautiful glistening figure emerges from the spring. She stretches out her arm and it makes a path to forever.

"This is the magical way,

As you carry the crown through night and day;

The season’s song will shift and change.

All elements will rearrange.

My path is neither short nor long,

For how can you measure the tune of a song?

Dance the path in step with your heart.

Mistress of the Seas - Greetings Card 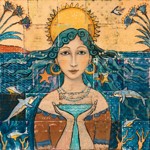 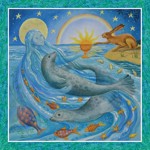 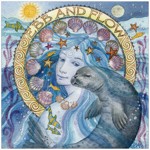 'Luna Moon Hare' - A Magical Journey With The Goddess 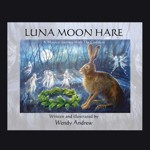