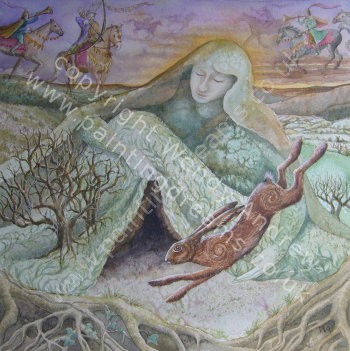 Legend tells that long years ago a hare was hunted by the Prince of Powys and found refuge under the skirts of a young pious maiden called Melangell and in that moment the huntmen's horns and arrows were silenced and stilled. The Prince was so impressed by her piety that he gave her that land to keep as a place of peace.

When I visited Penant Melangell in Wales, though the shrine to Melangell was in a pretty church, it was the spirit of the land that spoke to me...the mountains seemed to hold the mystery...

So in this painting I depict Melangell as Earth Mother. She offers Her secret sanctuary to the hare...and to all who ask for her protection.